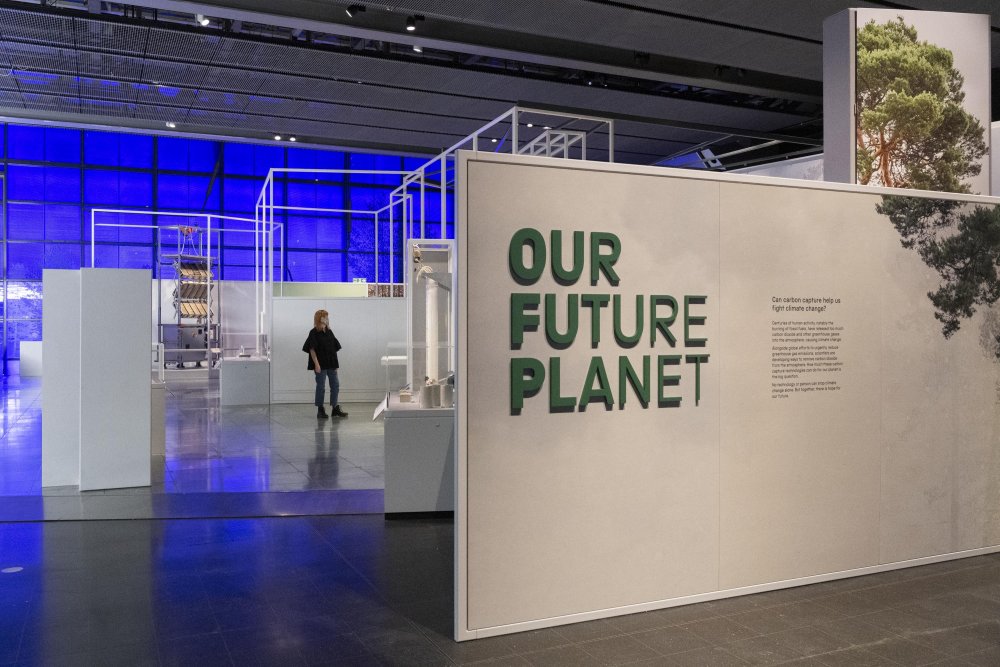 Our Future Planet
19 May 2021 – 4 September 2022
A free exhibition at the Science Museum
https://www.sciencemuseum.org.uk/see-and-do/our-future-planet

The first significant UK exhibition to be presented on the subject of carbon capture and storage, Our Future Planet will open on 19 May 2021 when the Science Museum re-opens its doors and will remain open to the public beyond COP26, the 26th United Nations Convention on Climate Change.

Carbon dioxide is essential to life on Earth but over the last century industrialisation has increased levels of it in the atmosphere with devastating impacts. Alongside efforts to reduce greenhouse gas emissions, scientists and researchers are exploring ways to actively remove and store carbon dioxide, a key area of innovation in the fight against climate change. Our Future Planet will inspire visitors through showcasing some of the incredible technologies being developed which, in combination with large reductions in emissions, have the potential to reduce the environmental impact of the industries we rely on every day, from transport and travel, to agriculture and construction.

Visitors to the exhibition will be taken on a journey exploring key areas of scientific and technological innovation, from conserving ancient woodlands to installing processes that prevent carbon dioxide leaving power stations and factories. The exhibition will explore how we can use these techniques to reduce atmospheric carbon, and how this carbon can be held in mass storage or used to create everyday products like building materials, toothpaste or even vodka.

Our Future Planet forms a key part of the Science Museum Group’s climate-focused public programme for the year ahead. As the Group works to raise climate awareness through exhibitions and events, it is also transforming its working practices to be more sustainable. This includes committing to achieve Net Zero by 2033, alongside engaging the public with the science and solutions to the urgent challenges facing our planet.

In keeping with this commitment sustainability has been at the core of the development of the exhibition. The majority of objects are being locally sourced and the exhibition will reuse setworks, showcases and AV equipment from previous exhibitions at the museum. The design itself will also bring the outdoors inside, as visitors are taken on fly-through journeys of different forests and hear from the scientists studying them.

Sir Ian Blatchford, Director of the Science Museum Group, said: ‘Climate change takes centre stage in our programme in the run-up to the COP26. As we welcome visitors back to the museum we’ll be inviting them to ignite their curiosity as we explore how science can help humanity take on the existential threat of global heating.’

Dr Sophie Waring, Curator of Contemporary Science, said: ‘Our Future Planet will offer visitors an introduction to technologies that capture carbon dioxide, and explore options for storage and utilisation ranging from the preservation and management of forests to the capture and storage of carbon on an industrial scale in power generation and concrete production. Objects on display will highlight the importance of this research to help protect our planet from the effects of global warming caused by excess carbon dioxide in the atmosphere. We hope that visitors will leave feeling inspired by the ambition of scientists and engineers to build a greener future.’

On first entering the exhibition, visitors will encounter the oldest forms of carbon capture technology: trees and plants. Natural carbon sinks, from forests to peat bogs to oceans, absorb around half of human carbon dioxide emissions, and scientists are working to understand, preserve and protect these vital habitats. Visitors will encounter apparatus from the UK's BIFoR FACE experiment, one of only two facilities in the world that can model the impact of climate change on forest ecosystems, and will get to explore how bioenergy systems, managed correctly, could help power generation move towards carbon neutrality.

Inspired by trees and driven to contribute to the fight against climate change, many scientists and engineers are now developing artificial ways to capture carbon dioxide. As visitors enter the second section of the exhibition, they will be greeted by a striking early prototype – Klaus Lackner’s Mechanical Tree – one of only a few working mechanical trees in the world. The Science Museum Group has acquired this historically significant object for its permanent collection, and this is the first time it will be displayed in the UK.

Moving through the exhibition, visitors will discover how carbon dioxide that has been pulled from the atmosphere can then be stored or utilised to prevent it from being re-released. On display will be the Climeworks Direct Air Capture machine from Switzerland: the only direct air capture technology operating in Europe. It illustrates the future potential of direct air capture to industries who are looking for the ability to offset their emissions by removing excess carbon dioxide straight from the atmosphere. Visitors will also get to see (for the first time in the UK) a basalt rock core from Carbfix in Iceland containing carbon dioxide removed from the atmosphere that has been pumped deep underground. 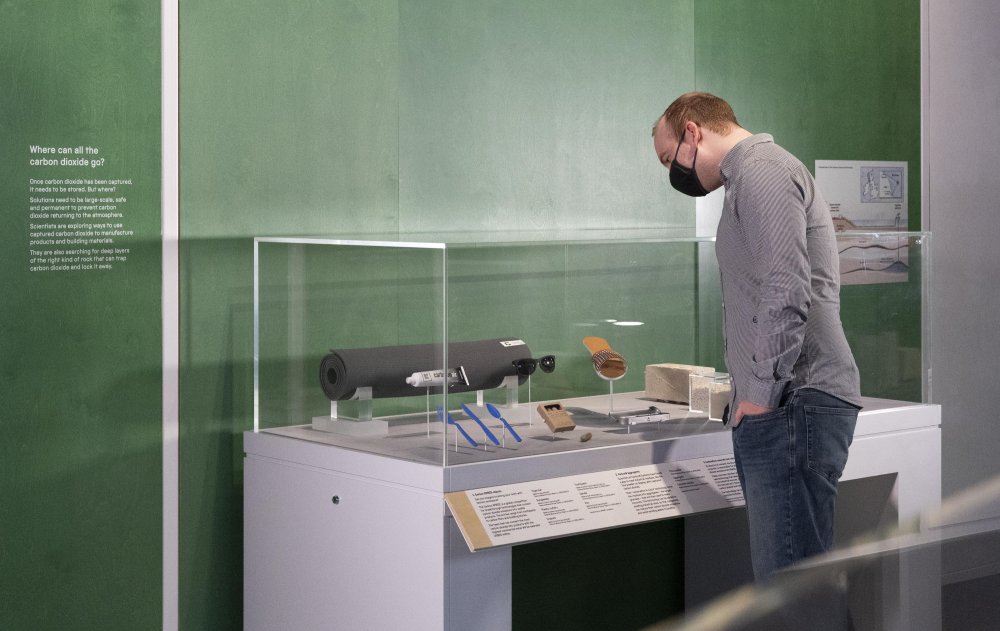 In the final section, the exhibition will show systems being developed to remove carbon dioxide at the point of emission, effectively preventing it from entering the atmosphere at source. Highlights include the “Carbon Capture Machine” team at the University of Aberdeen: the only European finalist for the Carbon XPRIZE; C-Capture, who have developed and are now trialling a chemical process to trap and store the carbon dioxide produced by the largest power station in the UK; and examples of concrete that have carbon dioxide stored in them.

Within this section visitors will also be able to see how these technologies will impact their lives, from large-scale projects like the Northern Endurance Partnership, which will store captured carbon dioxide under the North Sea, to new commercial products that use carbon dioxide removed from the atmosphere, including sunglasses, yoga mats and even vodka. These products speak to the growing concerns of consumers looking to reduce their carbon footprints and industries looking to reinforce their green credentials. Visitors will be given a sense of how these dramatic technological interventions are now being implemented in the real world, and their role in helping to prevent the worst impacts of climate change.

Our Future Planet will be free and open Wednesday – Sunday from 10.00 until 18.00. During school holidays the museum is open seven days a week.

About the Science Museum Group

The Science Museum Group is the world’s leading group of science museums, welcoming over five million visitors each year to five sites: the Science Museum in London; the National Railway Museum in York; the Museum of Science and Industry in Manchester; the National Science and Media Museum in Bradford; and Locomotion in Shildon. We share the stories of innovations and people that shaped our world and are transforming the future, constantly reinterpreting our astonishingly diverse collection of 7.3 million items spanning science, technology, engineering, mathematics and medicine. Standout objects include the record-breaking locomotive Flying Scotsman, Richard Arkwright’s textile machinery, Alan Turing’s Pilot ACE computer and the earliest surviving recording of British television. Our mission is to inspire futures - igniting curiosity among people of all ages and backgrounds. Each year, our museums attract more than 600,000 visits by education groups, while our touring exhibition programme brings our creativity and scholarship to audiences across the globe. More information can be found at sciencemuseumgroup.org.uk.

About Together for Our Planet

The COP26 Unit in the Cabinet Office launched its domestic campaign, Together for our Planet, in November to mark one year to go to the Summit. Over the next year, Together for our Planet will galvanise the UK public behind COP26, building awareness, understanding, support and pride in the UK COP26 Presidency. The campaign will celebrate the climate action already being taken across the four corners of the United Kingdom reaching all segments of the British public and encouraging further action.

Together for our Planet will create opportunities to get the public involved in COP26 through competitions and inclusive engagement. The campaign will work closely with businesses, civil society groups, schools and people across the UK to engage them in the conversation on tackling climate change.

The Science Museum Group and sustainability

The Science Museum Group (SMG) has been a leader in raising climate awareness through its public programme while the Group’s approach to sustainability has transformed its working practices and collections care. Highlights from the past decade include:

Find out more about Sustainability and the Science Museum Group.

About UK Research and Innovatio

UK Research and Innovation works in partnership with universities, research organisations, businesses, charities, and government to create the best possible environment for research and innovation to flourish. We aim to maximise the contribution of each of our component parts, working individually and collectively. We work with our many partners to benefit everyone through knowledge, talent and ideas. Operating across the whole of the UK with a combined budget of more than £7 billion, UK Research and Innovation brings together the seven research councils, Innovate UK and Research England. www.ukri.org

Shell is a global group of energy and petrochemical companies that aims to meet the world’s growing need for more and cleaner energy solutions in ways that are economically, environmentally and socially responsible. We have a target to become a net zero emissions energy business by 2050, in step with society and are working to cut the emissions from our own operations, as well as reducing greenhouse gas emissions per unit of energy that our customers use. But there is no single solution. Carbon Capture and Storage (CCS) is essential for society to reach the goals of the Paris Agreement and Shell seeks to have access to an additional 25 million tonnes a year of CCS capacity by 2035.

Nature-based solutions can also make a big contribution and we are working with projects around the world that help reduce CO2 emissions, while improving the lives of local communities and protecting biodiversity. We only work with nature-based projects that are certified under credible, high-quality and independent carbon credit standards.

About the AKO Foundation

The AKO Foundation was set up in 2013 by Nicolai Tangen, a native Norwegian and founder of AKO Capital, a London-based investment business.  The Foundation supports initiatives within the arts, education and climate, and has already made grants totalling in excess of £100 million.

About the Huo Family Foundation

The Huo Family Foundation is a grant-giving foundation based in London. Its mission is to support education, communities and the pursuit of knowledge.  The Foundation’s current focus is in five main areas: education; neuroscience and psychology; public policy; the arts; and Covid-19 research.

Discover South Kensington brings together the Science Museum and other leading cultural and educational organisations to promote innovation and learning. South Kensington is the home of science, arts and inspiration. Discovery is at the core of what happens here and there is so much to explore every day. discoversouthken.com