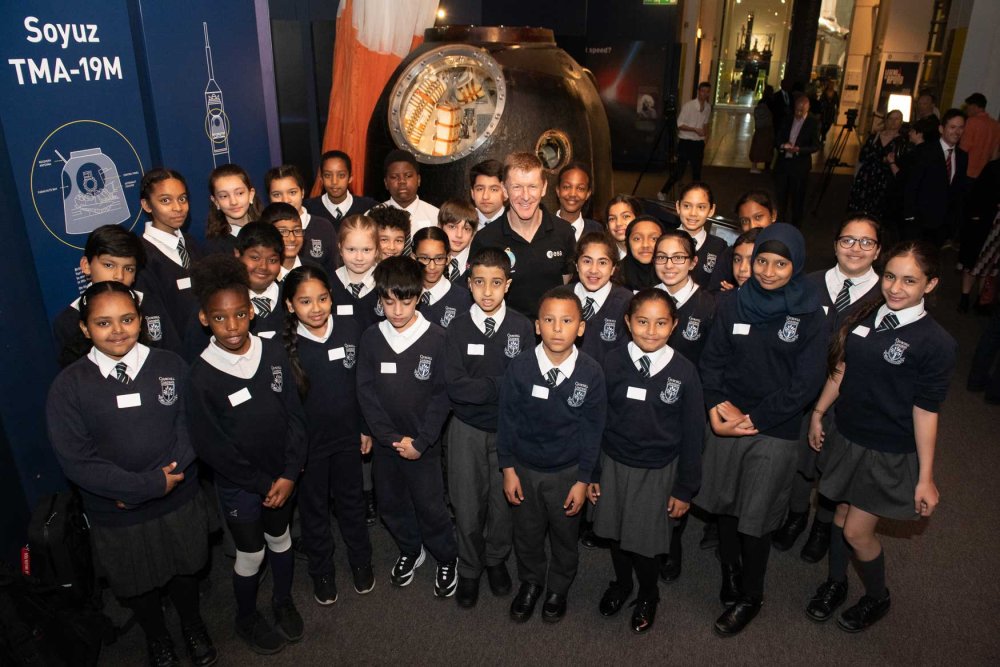 Tim Peake joined the Science Museum Group today in announcing that over 1.3 million people visited the Soyuz spacecraft from his Principia Mission during its 20-month tour of the UK.

Peake announced the remarkable visitor figures as Soyuz TMA-19M was officially unveiled in a new permanent display at the Science Museum to launch a museum-wide Summer of Space.

Culture Secretary, Jeremy Wright, said: "The record number of people who saw Tim Peake’s Soyuz spacecraft highlights how science and space travel continue to inspire us. The tour’s success underlines why we make our world-class culture accessible to everyone in all corners of the country.”

Sir Ian Blatchford, Director, Science Museum Group, said: “The tour of Tim Peake’s spacecraft to museums in all four corners of the UK has been a testament to the power of culture to inspire. With Russian, European and UK space ingenuity all contributing to the success of Tim’s mission, the importance of international collaboration in achieving progress for us all is more starkly obvious than ever.”

ESA Astronaut, Tim Peake, said: “I’m incredibly proud that over 1.3 million people across England, Northern Ireland, Scotland and Wales have had the chance to get up close to my Soyuz spacecraft. It’s wonderful how the Science Museum Group and Samsung have come together through this tour to extend the Principia Mission’s impact in inspiring the next generation of scientists and engineers.”

Space Descent VR, the stunning virtual reality journey voiced by Tim Peake himself, accompanied the spacecraft on tour, enabling nearly 50,000 people to experience in first-person the high-speed descent to Earth from the International Space Station. The VR experience was produced especially for the Science Museum Group and is powered by the latest Samsung Gear VR technology.

A three-strand Education Outreach Programme, developed by the Science Museum Group and Samsung, reached over 20,000 students through a combination of in-school sessions with the Science Museum Group’s Explainer team, special visits to see the Soyuz and a bus designed to replicate the setting of the International Space Station, with headsets showing Space Descent VR. In addition to the Education Outreach Programme, the bus visited communities across the UK welcoming over 21,000 onboard.

As the world heralds half a century since the Apollo Moon missions, the Soyuz has been joined on display at the Science Museum by the original Apollo 10 command module simulator console; a key object in NASA’s contribution to the space race, and one which has never been seen in the UK before.

On long term loan from the Smithsonian, the control panel goes on display alongside the Apollo 10 command module ‘Charlie Brown’, which still holds the record for the fastest crewed vehicle in history having reached 39,897 km/h during its return to Earth on 26 May 1969. The Apollo 10 mission took astronauts Gene Cernan, Tom Stafford and John Young on two successful orbits of the Moon in a dress rehearsal for the historic Apollo 11 Moon landing which followed two months later in July 1969.

The Science Museum is marking the 50th anniversary of the lunar landing with a dedicated Summer of Space, including:

To find out more please contact Simon Thompson in the Science Museum press office on 020 7942 4443 or via simon.thompson@sciencemuseum.ac.uk

About the Science Museum Group
The Science Museum Group is the world’s leading alliance of science museums, welcoming over five million visitors each year to five sites: the Science Museum in London; the National Railway Museum in York; the Science and Industry Museum in Manchester; the National Science and Media Museum in Bradford; and Locomotion in Shildon. We share the stories of innovations and people that shaped our world and are transforming our futures, constantly reinterpreting our astonishingly diverse collection of 7.3 million items spanning science, technology, engineering, mathematics and medicine. Our mission is to inspire futures - igniting curiosity among people of all ages and backgrounds. Each year, our museums attract more than 600,000 visits by education groups, while our touring exhibition programme and websites bring our creativity and scholarship to audiences across the globe.

About Samsung Electronics Co., Ltd.
Samsung inspires the world and shapes the future with transformative ideas and technologies. The company is redefining the worlds of TVs, smartphones, wearable devices, tablets, digital appliances, network systems, and memory, system LSI, foundry and LED solutions. For the latest news, please visit the Samsung Newsroom at http://news.samsung.com/uk.

About the National Tour of Tim Peake’s Spacecraft, presented by Samsung and the Science Museum Group

About the Soyuz TMA-19M descent module

About space technology in the Science Museum Group Collection

The Science Museum Group Collection contains significant space technology objects. As well as the Soyuz TMA-19M spacecraft now on display in the Exploring Space Gallery, there is the Sokol KV-2 emergency spacesuit worn by Tim Peake and the Sokol spacesuit worn by Dr Helen Sharman, the first Briton in space. Also in the collection are seven dishes, including a bacon sandwich, made by chef Heston Blumenthal for Tim Peake’s Principia Mission.

The Apollo 10 command module is displayed in the Science Museum on long-term loan from the Smithsonian, as well as a piece of Moon rock on loan from NASA which was brought back by the Apollo 15 crew.

Further information is available via: collection.sciencemuseum.org.uk/search/categories/space-technology