From the Stone Age to the Space Age, people have watched and studied the stars. The sky has been our clock, our compass and a source of wonder. We have created a huge variety of instruments to help us study the skies and make sense of what we see

The Science Museum’s astronomy collections span from the 10th century to the present day and contain a wide range of observation and demonstration equipment.

Alongside the works held in our Library and Archives, they form one of the world’s best collections for studying the history of astronomy. The following highlights illustrate its range, and you can find much more by using our online search. 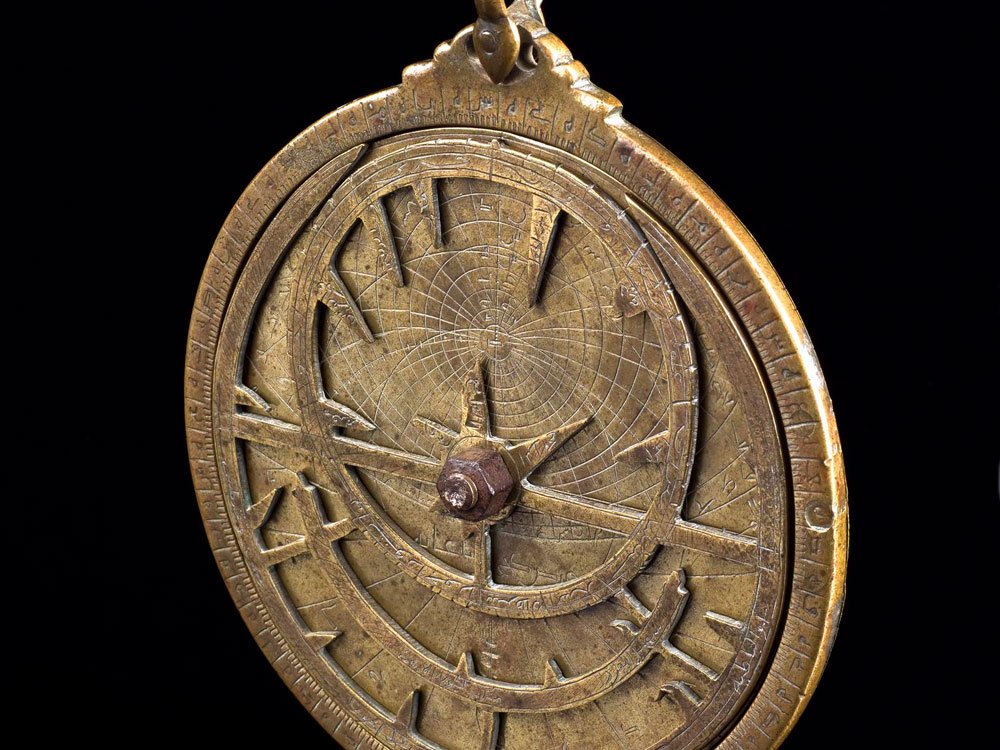 Knowing the time for prayer and locating the direction of the holy city of Mecca is a key part of Islam. Medieval Islamic scholars developed the original Ancient Greek design for an astrolabe to create a highly sophisticated instrument. Many 11th-century mosques employed their own muwaqqit or astronomer-timekeeper who was responsible for using an astrolabe like this one to determine the essential prayer times and directions. 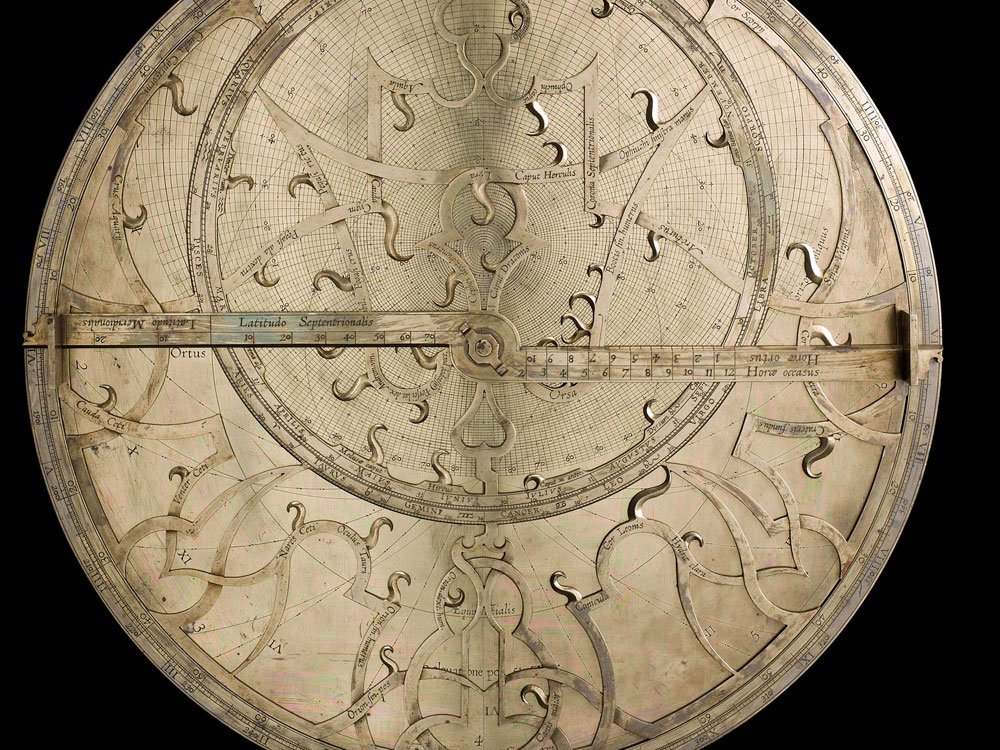 The astrolabe was the main astronomical instrument before the telescope. It could be used to tell the time, determine star positions at particular latitudes and predict future astronomical events.

Each curly pointer corresponds to a bright star. On this astrolabe you can see a tulip shape in the framework – the signature style of the renowned Arsenius family workshop in Flanders. 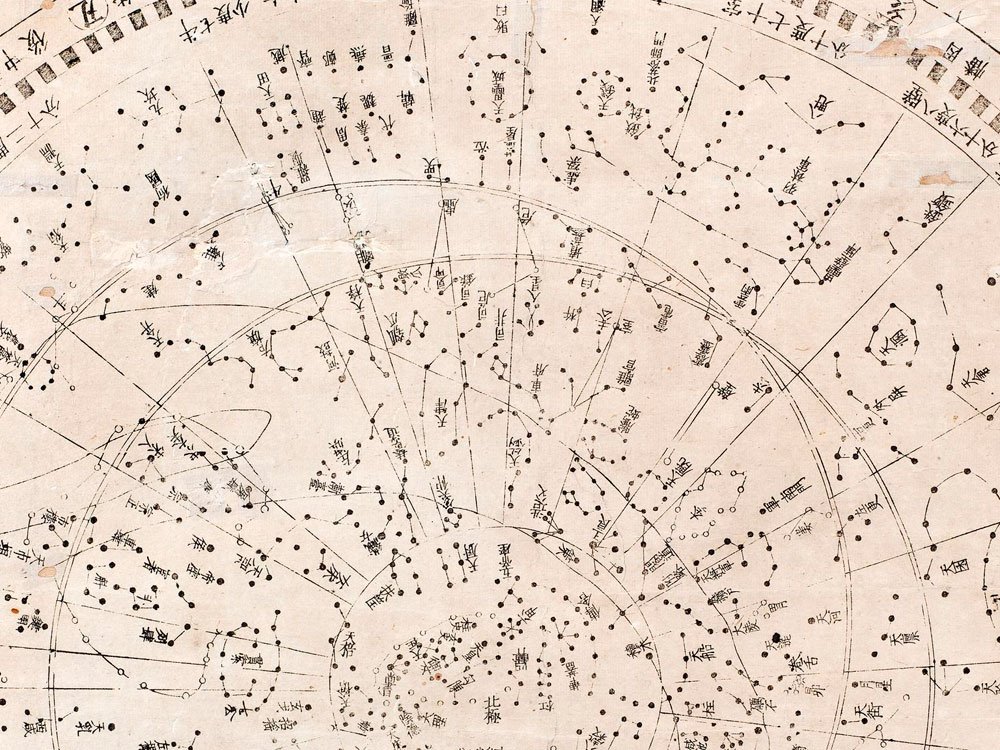 This star map was made by Harumi Shibukawa, official astronomer to the Japanese Edo court. He was one of the first people to use a telescope in Japan after the instrument was introduced by European traders.

Shibukawa combined his systematic observations with concepts from Chinese astrology to create the map, which made it possible to use the positions of the stars to predict events in different regions of Japan. 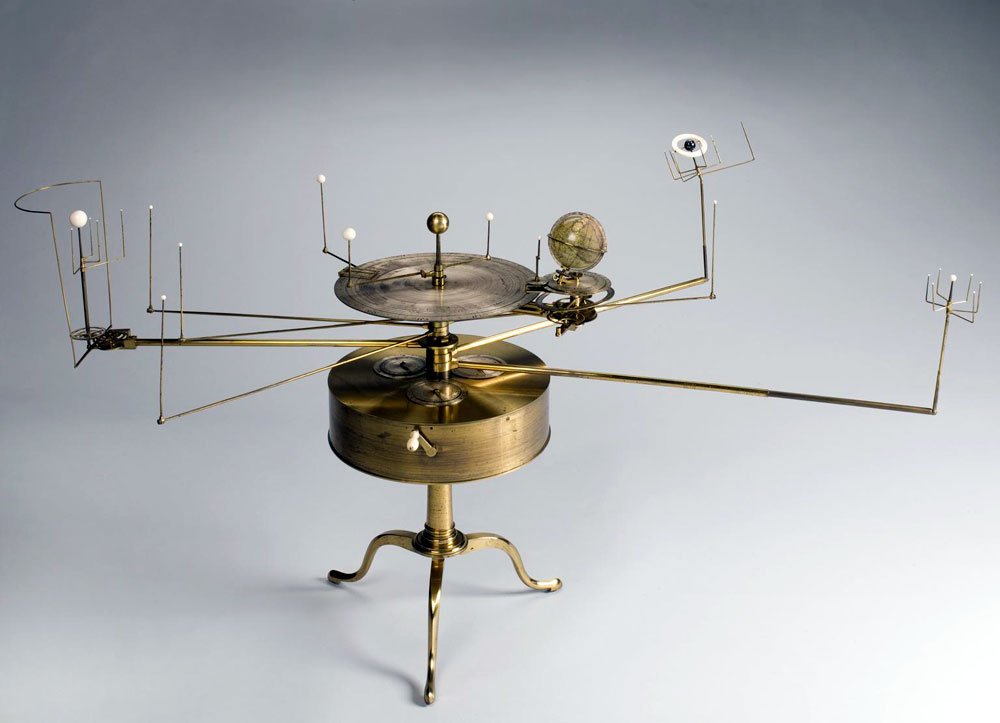 This orrery, or planetary model, shows six satellites around Uranus, the farthest planet then known. William Herschel discovered the innermost two, Titania and Oberon, in 1787. By 1798 he had reported four additional satellites. However, no other astronomer managed to see these and observations in the 1850s showed Herschel was mistaken.

We now know of almost 30 Uranian satellites. All are named after characters from Shakespeare or Pope, following a tradition started by Herschel’s son John. 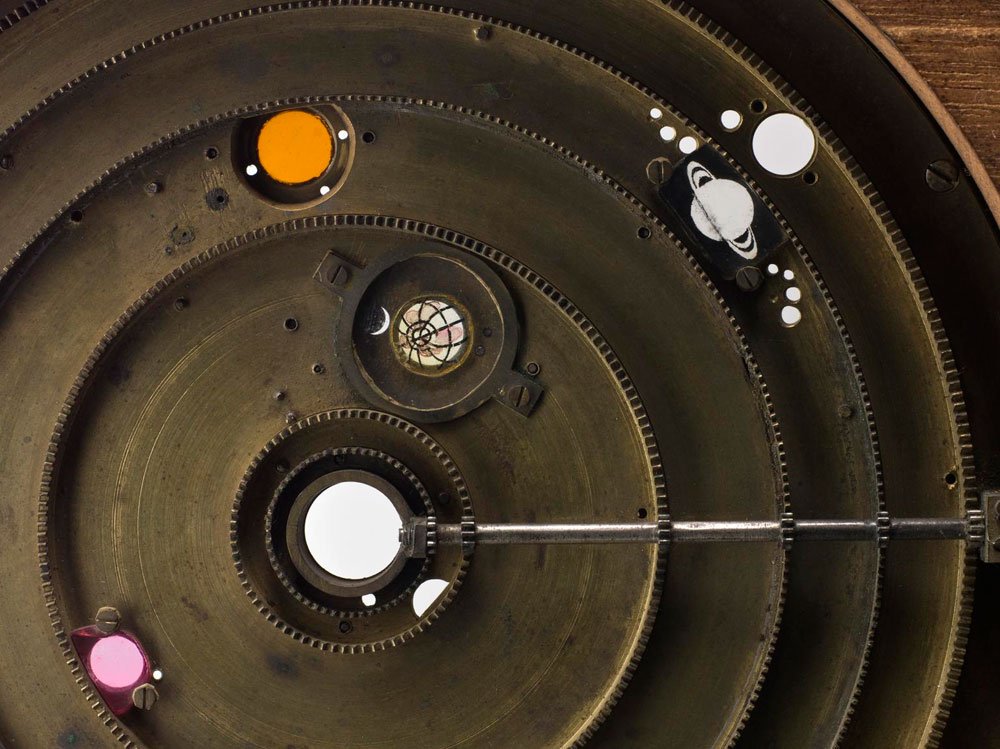 This lantern slide projects the planets onto a wall, and has a geared system to illustrate their motion and relative speeds.

A travelling astronomy lecturer called Mr Keevil used it in Holywell in Wales on 3 May 1838, in a dazzling show demonstrating eclipses, the planets and their moons. For this fashionable event gentlemen paid 2 shillings while ladies only paid a shilling.

This giant mirror belonged to what was the world’s largest telescope until 1917. It was constructed by William Parsons, third Earl of Rosse, at his castle in Ireland. Such was its renown that it appeared in Jules Verne’s 1865 novel From the Earth to the Moon:

‘We know that the instrument mounted by Lord Rosse at Parsonstown, which magnifies 6,500 times, brings the moon to within an apparent distance of sixteen leagues.’

An engineering marvel of its day, the mirror weighs over 4000 kilograms and is 1.8 metres in diameter. It was cast in speculum metal, an alloy of copper and tin, then ground and polished. Mounted on a rail carriage, the mirror was rolled in and out of the telescope when it needed re-polishing.

The telescope wasn' a huge success, largely because the Irish weather made observations difficult. But Lord Rosse did discover spiral forms in previously hazy patches of sky, some of which are now known to be galaxies beyond our own. 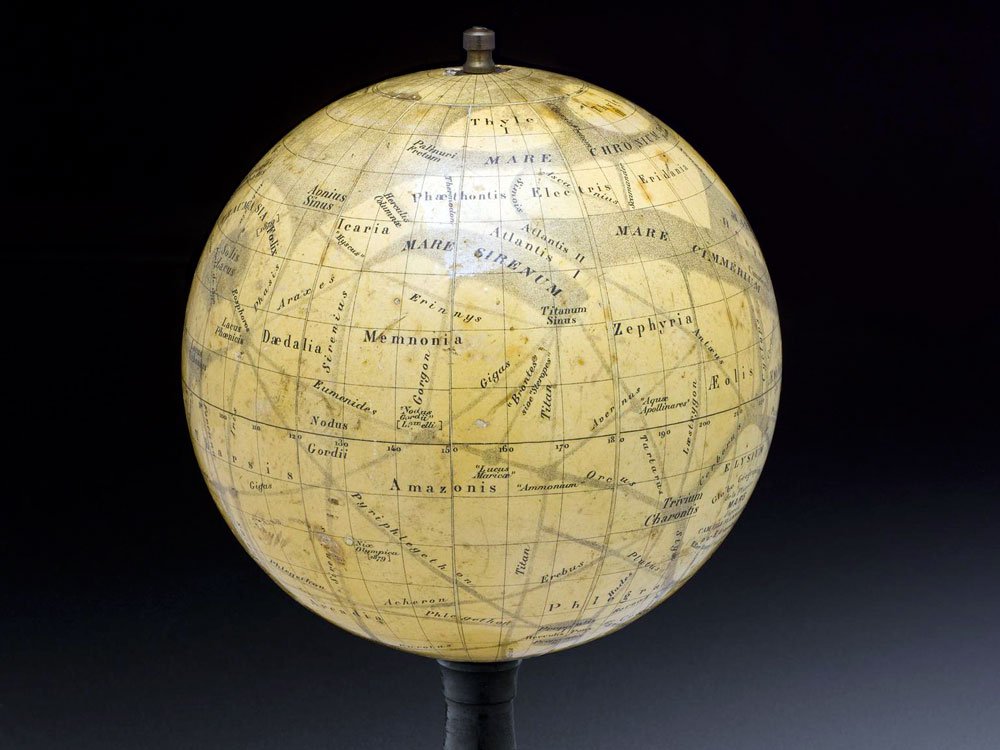 This Mars globe shows surface details of the Red Planet observed and named by Giovanni Schiaparelli in 1877. Schiaparelli used the word canali to describe lines that seem to run between the darker areas.

Some astronomers, particularly Percival Lowell, believed these to be irrigation channels and therefore evidence of intelligent life on Mars. But later studies revealed a barren planet, although scientists are still searching for evidence of bacterial life.

Photograph from the 1919 eclipse expedition 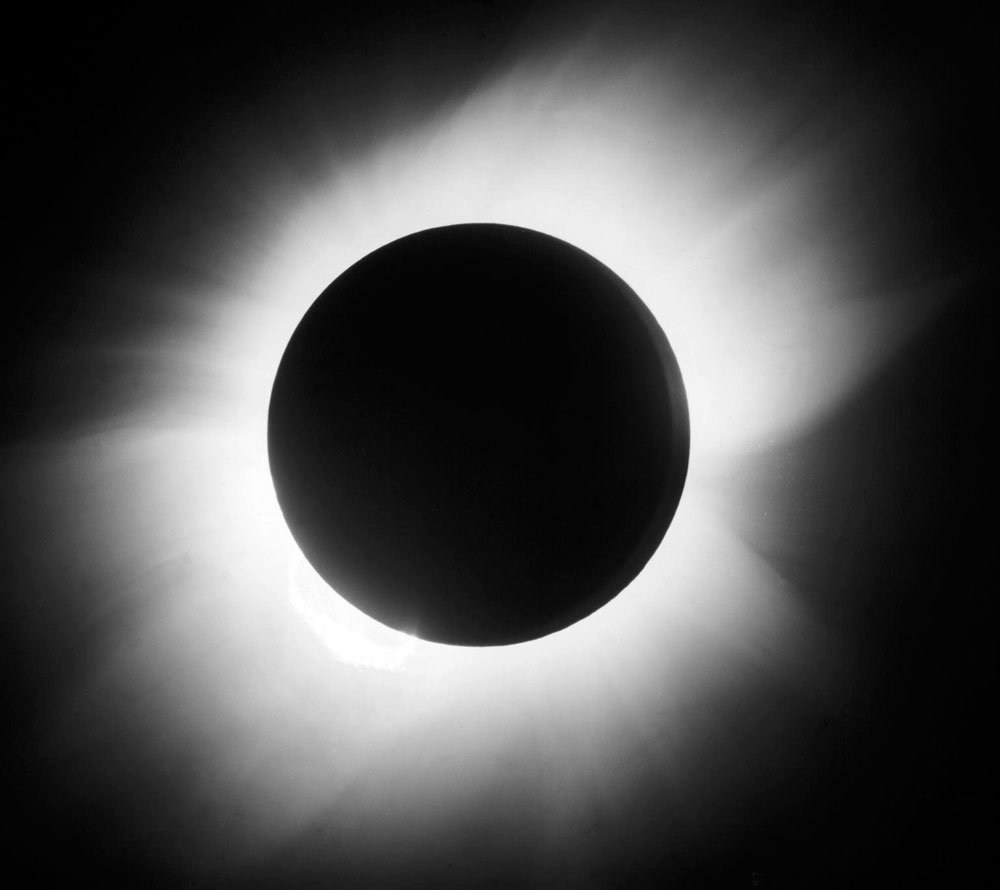 In May 1919, British physicist Arthur Eddington organised a test of Einstein’s general theory of relativity. Two Royal Society teams observed a solar eclipse from Brazil and the island of Principe off west Africa.

Photographs appeared to show that the mass of the Sun had bent light from distant stars, just as Einstein had predicted. This gravitational distortion could only be observed during a total eclipse, when the Sun’s own light was masked. 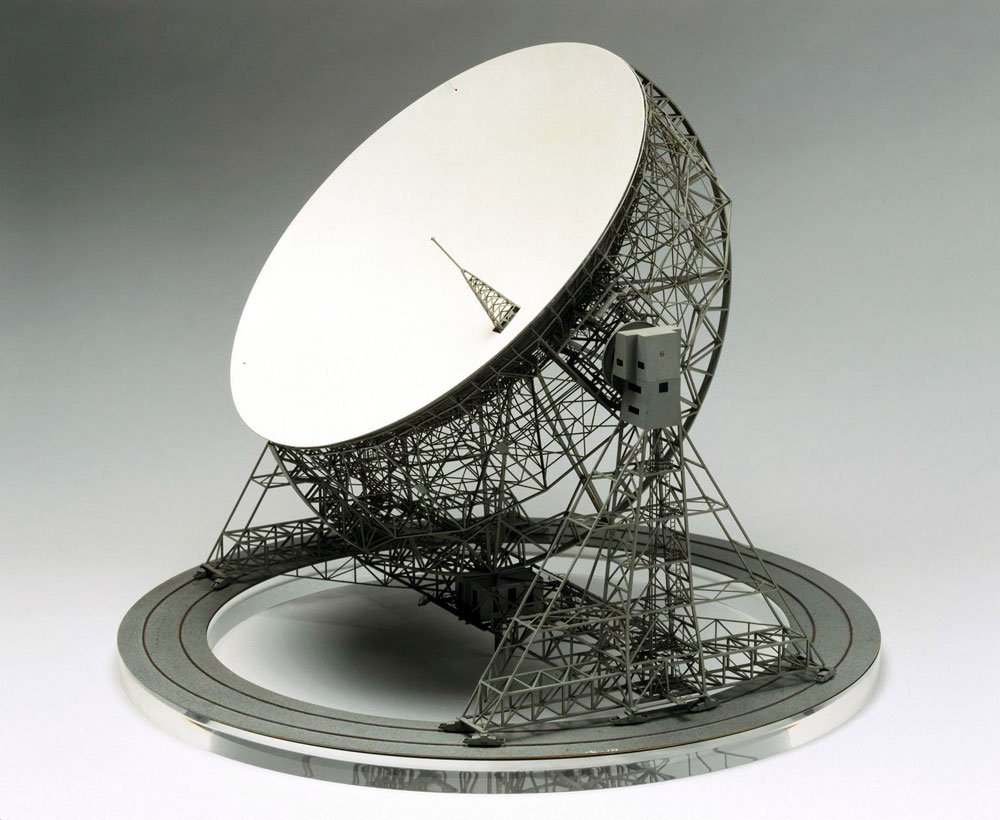 The 76-metre Lovell Telescope at Jodrell Bank is the third largest steerable radio telescope in the world. It was originally built to track cosmic rays, high-energy particles from space, with radio waves. Designer Bernard Lovell drew on expertise he had developed for radar systems during the Second World War.

The telescope has been used for a wide range of astronomical and space work, including the tracking of Sputnik 1, the world’s first artificial satellite. It is now a Grade I listed building. 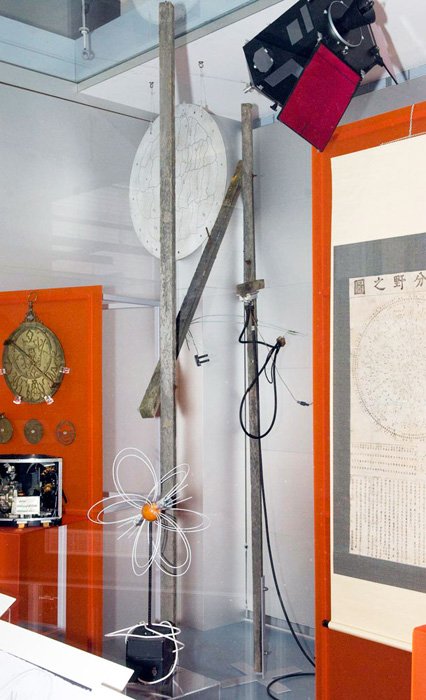 This is part of the four-acre radio telescope used in one of astronomy’s most famous chance discoveries. In 1967, student Jocelyn Bell noticed a ‘bit of scruff’ on the telescope’s data charts. Astronomers realised that the unusual signal, which repeated regularly, came from a new class of cosmic object.

Initially, these objects were nicknamed LGM, for ‘little green men’. But rather than aliens, they are rapidly spinning dense stars. They are called pulsars and over 1800 are now known. 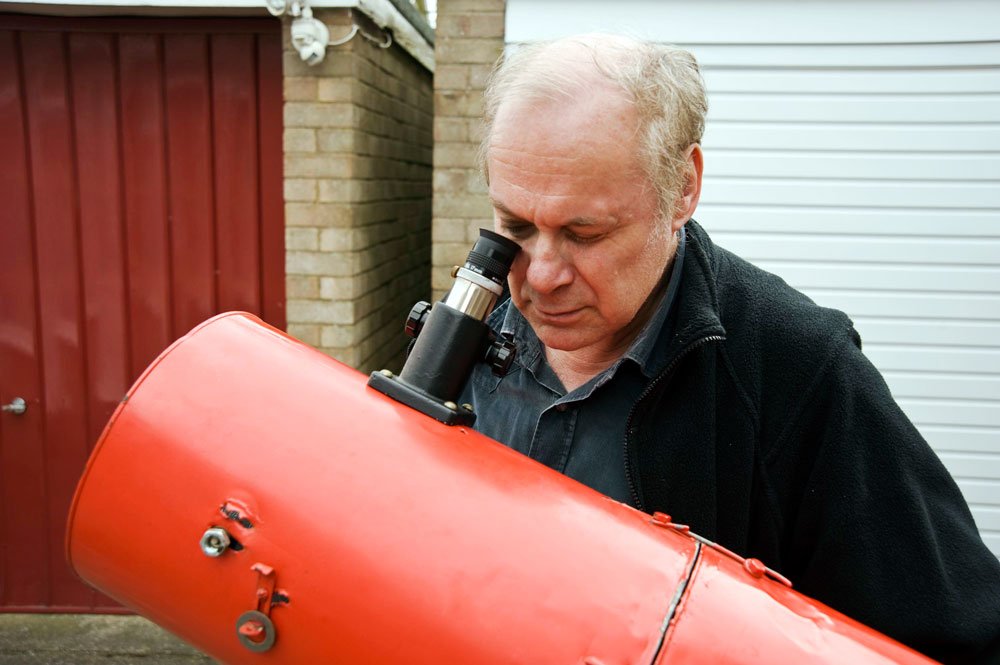 When 18-year-old Phil Shepherdson wanted a good telescope he decided to make one himself. Take a closer look at the tube – it is made of everyday items such as baked bean cans and wire coat hangers.

Phil’s biggest challenge was making an astronomical-quality mirror. It took months of hard graft and experiment, but he managed to hand-polish a glass blank into an accurate reflecting surface. The finished telescope gave him ‘breathtaking’ views of the Moon and Jupiter.

DRIFT-1 was built by UK and US scientists to search for ‘dark matter’. This invisible matter, thought to make up around 23% of the universe, is known to exist because its gravitational effects on ordinary matter in stars, galaxies and planets can be observed.

Scientists think that dark matter is most likely to be previously unknown particles. DRIFT-1 ran between 2001 and 2004, 1.1 kilometres underground in Yorkshire’s Boulby Mine. It did not detect dark matter particles, but its powerful successors continue the search. 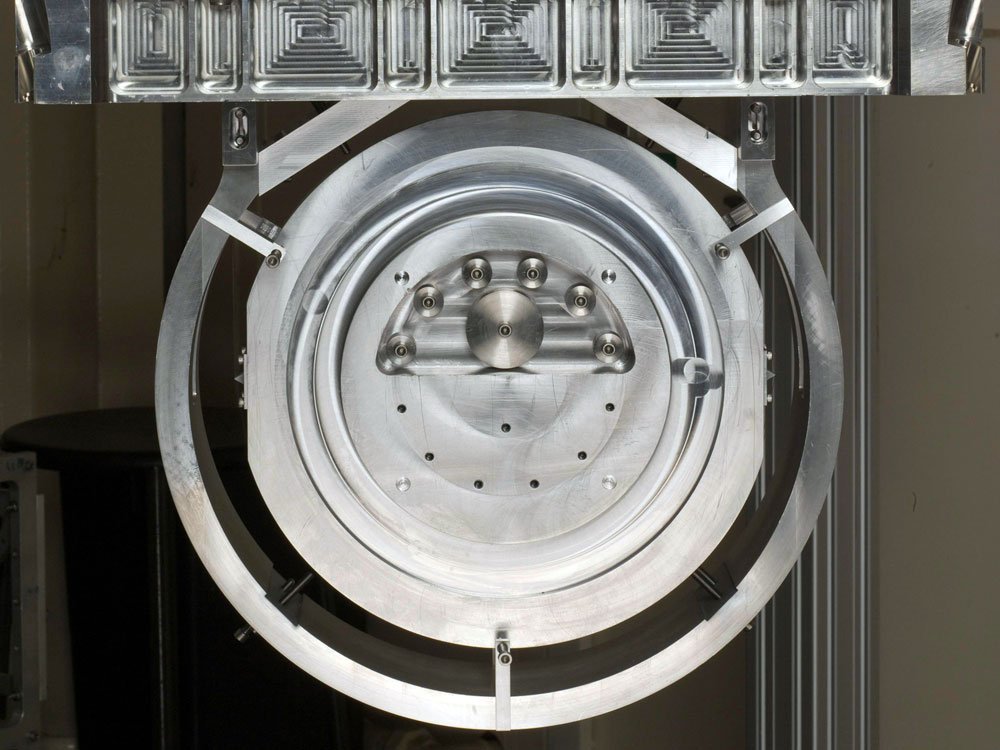 This is a prototype part for the Advanced Laser Interferometer Gravitational Wave Observatory (aLIGO), one of the most sensitive experiments ever designed. aLIGO splits a laser beam down two paths, several kilometres long. Scientists look for changes in the path lengths that might be caused by a passing gravitational wave.

Gravitational waves are tiny, fleeting warps in the fabric of space-time, predicted by Einstein’s general theory of relativity. They are caused by moving bodies such as colliding stars. In 2015, the aLIGO team announced that gravitational waves had been detected, providing another confirmation of Einstein’s theory and opening up a new window on studying the cosmos.

Find out more
Back to Top