Market stalls selling anything from fresh vegetables to recycled clothing are a standard feature of street scenes in sub-Saharan Africa.

In Cameroon, from the late 1990s onwards, a new kind of stall appeared in ever-greater numbers.

Brightly painted in the colours of the new mobile phone networks, these ‘call boxes’ offered people the chance to speak to relatives or business partners over a rented mobile phone handset, to buy new SIM cards, or to recharge their own phone.

Communication is a basic human need, and throughout history cultures have developed their own ways of communicating.

In Cameroon, people sent messages from village to village by beating out rhythms on a form of the West African ‘talking drum’. The messages encoded in the rhythms could travel great distances before skilled interpreters received and decoded them—an instant (and much cheaper) alternative to many of the communications technologies of the 20th century.

Talking drums are still an important feature of Cameroonian ceremonies, but they now take their place in the country’s communications culture alongside the all-encompassing mobile telephone network.

Call boxes were only the most visible sign of the mobile phone’s transformation of Cameroonian society.

What problems did the call box help to solve?

Until the late 1990s, few people in the country had access to phones. The state-owned landline network was limited and expensive. Public telephones were located only in towns and cities, so people living in rural areas had to travel long distances and queue to make a call.

In 1997 the government accepted the idea that greater connectivity would benefit the economy, and granted licences to two mobile phone companies, Mobile Telephone Network (MTN) and Orange.

The companies flourished as businesspeople—such as Roger Nche from the town of Bamenda in Cameroon’s northwest region—set up retail outlets for mobile phones.

The most desirable phones were well-known brands such as Nokia and Blackberry.

Owning a phone became essential for traders and other business people who needed to keep track of prices, retain contact with their customers, and transfer money without having to visit a bank.

Did the call box make a difference to people’s lives?

For the vast majority of people, having their own phone was at first an impossible dream.

The brightly-painted new call boxes—yellow for MTN, orange for Orange—stood out in the bustling streetscape, and business-savvy Cameroonians with the necessary start-up funds were immediately in business.

Overnight it became possible for ordinary people to make calls, often at a discounted rate. They could also buy credit for their own phones, and the better-off might transfer credit to less prosperous friends and family.

Far-sighted entrepreneurs, such as Emmanuel Bongsunu of Bamenda, began their call boxes at small tables shaded by umbrellas, and expanded them into colourful wooden structures as their profits mounted.

Young people especially took advantage of the new opportunity, taking turns with relatives and friends to run the boxes so that they could continue to study.

What was the impact of cheaper mobile phones?

Over the networks’ first decade, the price of a mobile phone fell within the reach of more and more Cameroonians, and demand for hiring a handset from the call boxes declined.

However, a phone was still a major purchase, and the cost of making calls could be significant. To minimise their costs, callers developed a practice known as ‘biping’—dialling a number but then hanging up as soon as the connection was made.

In this way they incurred no charge but registered a missed call on the recipient’s phone. The missed call message could itself communicate information between two people, such as “I’ll be late home”, or it could prompt the recipient to return the call at his or her own expense.

Biping was also a very low cost option at the call boxes.

What other opportunities did the mobile phone business create?

Those who owned phones were anxious to protect their investment.

The attitude of wealthy Europeans and Americans, who would casually dispose of working phones as they chased after the latest upgrade, was incomprehensible to thrifty Cameroonians.

They took pride in keeping the instruments going as long as possible, and formed associations to share expertise.

It was another unexpected business opportunity that the launch of the mobile networks had brought about.

All over Africa a similar pattern has emerged of new technology providing opportunities that were never previously available.

People who never had landline phones now have mobiles; people who never had a bank account now bank online; schoolchildren without physical books can read ebooks. Community organisations can join together to lobby for support, and raise awareness of issues internationally.

In less than two decades, Africa has become the fastest-growing market for mobiles, and it is on course to reach half a billion subscribers by 2020. 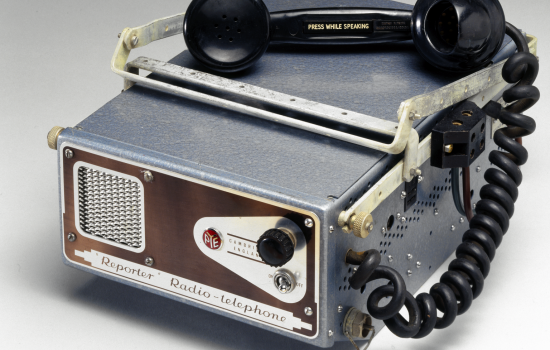 The invention of mobile phones

At the dawn of the 1980s, engineers raced to build a cellular phone network from scratch, changing the way we communicate forever.