The Great Fire of 1666 brought great tragedy to London, but also new opportunities. Fellows of the Royal Society and other natural philosophers (people engaged with what we know today as science) began to influence the look and feel of the city through the rebuilding process.

While London had experienced fires before, the 1666 fire devastated a huge geographical area and left a blank canvas for reimagining the city. Royal Society Fellows were not isolated academics who were only interested in experiments and theoretical discussions that took place behind closed doors. They were practically minded, always with an eye on the city and ready to apply their spirit of experiment and ingenuity to new challenges as they unfolded.

On 2 September 1666, following an unusually dry, hot summer, a strong and terrible fire swept through the City of London and beyond. Originating from a baker’s shop on Pudding Lane, the Great Fire raged for nearly five days before it was finally brought under control. Naval official and diarist Samuel Pepys personally witnessed the conflagration. He recorded in his diary:

a most horrid malicious bloody flame […] we saw the fire as only one entire arch of fire […] of above a mile long: it made me weep to see it. The churches, houses, and all on fire and flaming at once; and a horrid noise the flames made, and the cracking of houses at their ruins

The loss of London

Though there were, fortunately, few recorded human casualties as a consequence of the Great Fire, the built environment of the City of London was devasted by the flames. Four-fifths of the city within the walls was destroyed—including over 13,000 homes, 44 livery company halls, numerous warehouses, 87 churches, the Royal Exchange, and St Paul’s Cathedral. In his first-hand account of this ‘miserable and calamitous spectacle’, writer, diarist and Royal Society Fellow John Evelyn described how

‘the stones of [St] Paules flew like grenados [grenades], the lead mealting downe the streetes in a streame, & the very pavements of them glowing with fiery rednesse.’

The consequences of the Great Fire were devastating to many Londoners, not least the tens of thousands of people who were made homeless, lost their possessions, merchandise, businesses and livelihoods. But the ruining of the medieval city also presented new opportunities for imagining a novel urban infrastructure and design. Contemporary commentators with royalist sympathies suggested that—like the newly restored monarchy—a brilliant new London would emerge phoenix-like from the flames. In the immediate aftermath of the Great Fire, and in the decades that followed, technologies of surveying, mapping, and rebuilding proceeded apace. These activities were undertaken and coordinated by some of 17th-century London’s foremost natural philosophers, many of whom were also Fellows of the Royal Society.

Within a very short time after the fire had died down, various individuals proposed new plans for rebuilding the City, including Christopher Wren, Robert Hooke, John Evelyn, Richard Newcourt, and Valentine Knight. Within a week, Wren presented his magnificent new designs to King Charles II. He did so without formally consulting the other Fellows at the Royal Society, which caused some annoyance.

Two days later, Evelyn travelled to Whitehall for a royal audience with his own unique city plans. Both Wren’s and Evelyn’s proposals suggested a novel redesign of the layout and circulation of the City. They were inspired by continental city design, intended to rival Paris in their Baroque grandeur, including a radial street-pattern. This would be a new and magnificent royal city.

While the King had invited the submissions made by Wren and Evelyn and had not asked for more, Hooke, Newcourt and Knight submitted their designs anyway and each was based on a grid pattern.

In the end, none of these relatively radical plans for the new City were realised. London was rebuilt largely according to the old street-plan, with some roads widened and alleyways removed. This was in part because of the huge costs that the more imaginative schemes entailed, but also because the idea of total razing and rebuilding was very unpopular among London’s citizens, who wanted their property boundaries to be maintained and rebuilding to take place upon old foundations. However, it is fascinating to take a moment to consider how London might have looked had any of these plans been pursued.

The rebuilding of London was orchestrated by a Rebuilding Commission composed of six men—three appointed by the Crown, including Christopher Wren, and three chosen by the City, including Robert Hooke. All were experienced in either surveying, building or architectural design. The Commission was charged with the onerous tasks of managing the survey of derelict property, attending to the form and scale of new buildings, and modifications to the streets. Hooke’s indefatigable energy and ingenuity in the role of City Surveyor is especially striking. He was an ideal candidate for the job as he knew the pre-fire built environment of the City intimately and had great expertise in measurement and surveying. At the peak of rebuilding Hooke was measuring and setting out the foundations of 90 private properties per month. This was in addition to many other responsibilities, including his experimental duties for the Royal Society. Alongside Wren, Hooke also played a central role in the design and rebuilding of dozens of public buildings and city churches, including St. Martin’s without Ludgate on Ludgate Hill and (probably in collaboration with Wren) St. Benet, Paul’s Wharf on Bennet’s Hill, and St. Edmund the King on Lombard Street.

Monument to the Great Fire

Hooke and Wren’s most significant architectural collaboration in relation to the history of science was the Monument to the Great Fire of London, located at the top of Fish Hill and built between 1673 and 1679. It was intended to be not only a memorial to the devastation wreaked by the fire, but also an experimental site and a scientific instrument in its own right.

The Monument was likely designed in its entirety by Hooke, and evaluated and ratified by Wren at various stages in his capacity as Surveyor of the King’s Works. Standing 200 feet high, with a gilded flaming urn at its pinnacle, the Monument was designed as a hollow pillar, with the intention that it would house an enormous vertical zenith telescope (sadly, vibrations from the surrounding roads made precise astronomical measurements impossible). 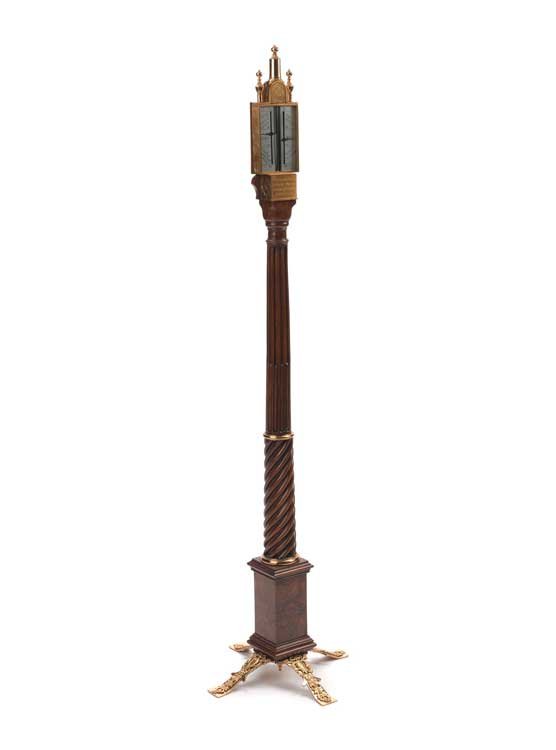 Under the base of the Monument an underground laboratory was created with enough room for several experimenters to record their observations. The Philosophical Transactions, the Royal Society’s journal and the first journal dedicated purely to natural philosophy, contains many letters and reports of experiments conducted there, including the natural philosopher and clergyman William Derham’s experiments with air pressure using a barometer made by the clock and watch-maker, Daniel Quare.

The legacy of the contribution made by natural philosophers during the aftermath of the Great Fire was three-fold. They reimagined the City and while the Baroque-inspired street plans of Wren and Evelyn were not realised, their work demonstrated that things could be done differently and possibly inspired new building projects in other parts of London in later years. The survival of their new buildings such as St. Paul’s Cathedral, which took 36 years to complete, the numerous City churches, and the Monument are indicative of the advanced surveying and architectural techniques required to build them. Furthermore, their ideas ensured that future buildings would not present the same risks in future. Wren, for example, contributed to the new London Building Acts of 1667 and 1670 by making recommendations regarding the heights of new buildings and the use of less flammable materials. The risk of fire continues to be a significant consideration in modern building projects and while today’s debates over the heights of buildings and the materials used to construct them are very different from those of the 17th century, it is noteworthy that these considerations formed the basis of building laws in London approximately 350 years ago.

Developed in collaboration with the Metropolitan Science Research Project, University of Kent, Places, Objects and Cultures of Practice and Knowledge in London, 1600-1800