Before we had modern anaesthesia, surgery was horrifically painful. The search for pain relief goes back a long way, and it’s a tale of mind-altering states, poisonous plants and recreational drugs.

Anaesthesia is the method of using substances, called anaesthetics, to reduce or block pain during surgery and other medical procedures. Different combinations of drugs and gases are used to create different levels of insensibility, from numbing one part of the body to making someone completely unconscious.

Many attempts have been made to reduce the excruciating pain of surgery. Until the arrival of general anaesthetics, the best that a patient could hope for was an intoxicant or sedative that would dull their senses while the surgeon operated as fast as he could.

The herbal origins of sedatives

Throughout the world, healers and mystics have used plants with mind-altering properties to alleviate pain and suffering.

One of the earliest examples of a sedative potion was mafeisan, a mix of herbal extracts created by the 2nd century Chinese surgeon Hua Tuo. The exact recipe is lost, but it may have contained cannabis or monkshood.

In the Middle Ages, sedative potions began to standardise around a particular group of plants, usually mixed with opium and alcohol. The English sedative dwale was an alcohol-based mixture containing bile, opium, henbane, hemlock, lettuce and vinegar.

By the 15th century, a mixture of opium, mandragora and henbane was the sedative of choice for surgical procedures such as amputation. Sedatives changed very little until the 19th century.

Many of the plants used for sedation are highly toxic and it didn't take much to turn a sedative into a poison.

Vapour inhalation is an established method for ingesting medicines, especially for chest and respiratory complaints.

And sedatives act far more quickly when inhaled than when drunk as a potion.

The Islamic physician, Ibn Sīnā (980–1037), described sedative inhalation for surgery in The Canon of Medicine, probably the most influential Medieval text in European and the Islamic medicine.

The Canon describes a 'soporific sponge', soaked in an herbal potion that is placed under the patient's nose during an operation to keep them sedated. The soporific sponge or cloth continued to be used in surgery into the 19th century.

While working at the Pneumatic Institute in 1798, a young Humphrey Davy tested on himself, the effects of inhaling nitrous oxide gas.

He noticed two things: the euphoric effect, which led him to call it laughing gas, and the fact that it alleviated the pain of his toothache.

He suggested that nitrous oxide could be used as an anaesthetic during surgery. His suggestion was not taken up by the medical profession, but laughing gas caught the public imagination, and demonstrations and gas inhaling ‘parties’ became all the rage.

Henry Hill Hickman (1800–1830) introduced the term ‘suspended animation’ to the world. He experimented with the use of carbon dioxide as an anaesthetic in the 1820s.

Unfortunately the medical journal The Lancet described his method as 'surgical humbug' and his work was dismissed. But both carbon dioxide and nitrous oxide are still used in anaesthesia today.

The first use of A general anaesthetic

The first reliably recorded use of a general anaesthetic was in Japan, in 1804. Physician Seishu Hanaoka performed a partial mastectomy on a 60-year-old woman with breast cancer.

His patient survived the operation, but she died six months after surgery. Hanoaka continued to perform complex surgery, which was often successful. He also trained more than 2,000 students throughout his career.

Hanoaka used a herbal mixture that was drunk rather than inhaled. It contained two very potent plants: monkshood and thorn apple.

His anaesthetic did not spread beyond Japan, and the rest of the world had to wait nearly 50 years for general anaesthesia.

Ether (diethyl ether) was the first general anaesthetic to be used widely in surgery. Michael Faraday actually published a report on the sedative and analgesic properties of this volatile and flammable liquid in 1818.

But as with nitrous oxide, it was appreciated more for its intoxicating effects than its anaesthetic properties. People attended ‘ether frolics’ to experience the effects of inhaling the vapour, public demonstrations were given and it was sold as an alternative to alcohol in pubs and shops in Britain and Ireland.

In the 1840s, medical students and dentists who attended ether frolics began to notice that people under the influence seemed to feel no pain. Boston dentist William Morton experimented with ether on himself before using it as an anaesthetic on his patients.

One of the reasons why dentists took up both nitrous oxide and ether more readily than surgeons was that their patients didn’t need to be insensible for long, and both substances were safer to use and control in small doses.

In 1846, Morton participated in the first public demonstration to use ether as a general anaesthetic in surgery at Massachusetts General Hospital. The operation was judged a success and surgeons across Europe and America were quick to see the potential benefits of a general anaesthesia.

In Edinburgh, Professor of Midwifery James Young Simpson became an enthusiastic advocate of anaesthesia and pioneered its use for women during childbirth.

Simpson discovered an alternative anaesthetic to ether—chloroform, a sweet-smelling, dense liquid. Chloroform received the royal seal of approval when Dr John Snow administered it to Queen Victoria during the birth of two of her children.

Surgeons in England shifted to chloroform because it was easier to use, while the Americans stuck to ether because it had fewer risks. But whether it was ether or chloroform, by the end of the 19th century general anaesthetics were widely accepted.

The evolution of anaesthetic equipment

Early anaesthetic equipment followed the inhalation method of putting some drops of ether or chloroform on a cloth and placing it over the patient's nose and mouth. Later equipment was designed for gases and the method of administration switched to injections with pharmaceutical anaesthetics. Local anaesthetics and pain relief could also be applied as eye drops, creams and tablets.

Advances in chemistry and pharmacology led to the manufacture of effective pharmaceutical anaesthetics. At first these were extracted from the plants used in traditional sedatives, but later new drugs were synthesised, which were more effective and had fewer side-effects.

Pharmaceutical drugs were administered intravenously, by injection, which meant that they were even faster to take effect than inhaled vapours and gases. They also had some very dark uses. 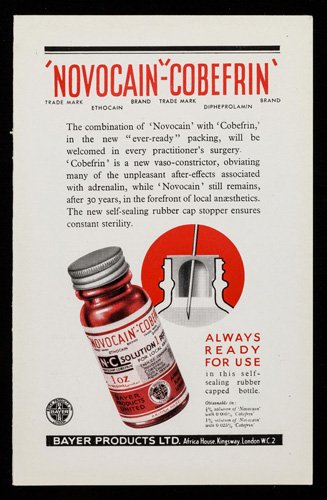 As 19th-century chemists investigates the traditional plants used for sedation, They found that many of the active ingredients came from the same group of chemicals, which they called alkaloids.

Morphine was one of first alkaloids to be isolated from the opium poppy. Belladonna and Mandragora contained a nerve agent called atropine, and coca leaves yielded cocaine.

By the end of the 19th century, apothecaries and doctors were using purified alkaloids as powerful sedatives and local anaesthetics. Purified cocaine was an early local anaesthetics, used particularly for eye surgery.

The synthetic drug Procaine was developed from cocaine in 1905, as a local anaesthetic without the euphoric and addictive effects of cocaine. It was better known by its brand name, novocaine, and was widely used in dentistry.

At the beginning of the 20th century, another class of compounds called barbiturates was developed. ‘Veronal’ was the first commercially available barbiturate, sold from 1903 onwards,

In 1934, a barbiturate called sodium thiopental was synthesised. It was a short-term, but fast-acting anaesthetic that was widely used in the initial stage of general anaesthesia to make the patient unconscious,

Like the alkaloid based anaesthetics, sodium thiopental has a darker side. In the Second World War it was used as a truth serum because of its hypnotic properties. It's also part of a cocktail of drugs used for capital punishment in the United States and for euthanasia in Europe.

Curare is the plant-based substance traditionally used on poison arrows by indigenous South American people. It's also the basis of a drug used in surgery. 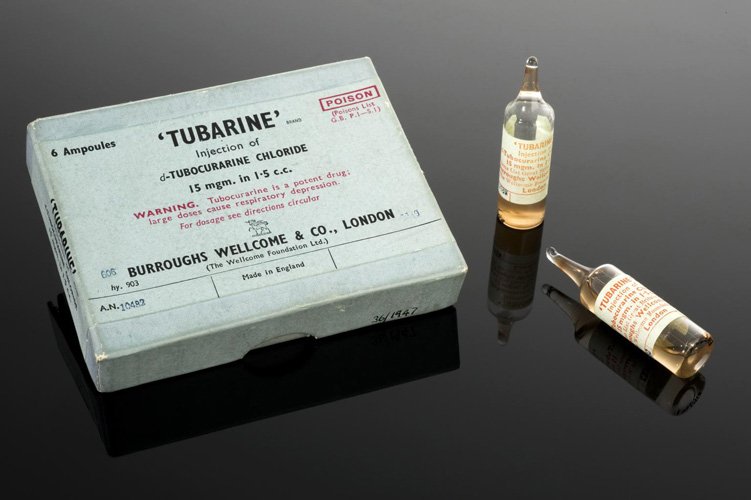 In 1942, two Canadian researchers, Griffith and Hohn, used it to develop a muscle relaxant for the stomach muscles and diaphragm so that surgeons could perform complex thoracic and abdominal surgery. Without it, dangerously high levels of general anaesthetic would have been needed, with the attendant risk of reduced circulation and breathing.

By the 1950s, all the elements of modern anaesthesia were in place. Anaesthesia has become part of the fabric of modern medicine. And anaesthetists are often the largest group of doctors in a hospital.

Dr Andrew Morely is a Consultant Anaesthetist at Guy's and St Thomas' NHS Trust in London. In this film he talks about modern anaesthesia and explain some of the complexities of being an anaesthetist. 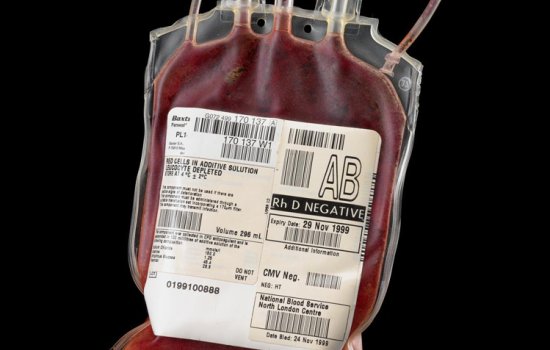 The problem of blood loss

Modern surgeons know how to deal with blood loss—but most of the methods they use are hundreds, if not thousands of years old. 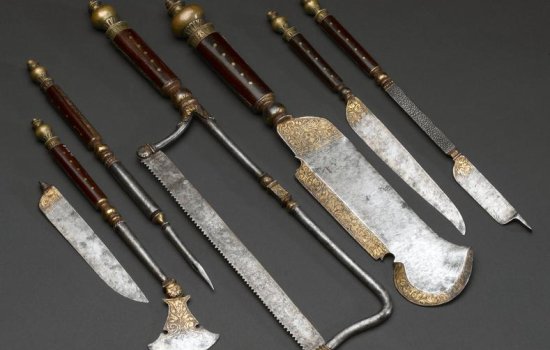 Discover objects which reveal the varied history of surgical instrumentation and how surgeons have intervened with our bodies.