Imagine the terror of not being able to breathe because your lung muscles are paralysed. You're gasping for air as the medical team slides you into something that looks like a coffin on legs. They seal you in up to your neck and a strange 'whooshing' sound starts somewhere in the room. Then, relief! Your lungs pull in fresh air and you find you're breathing again.

The coffin-like cabinet respirator—better known as the 'iron lung'—was the state-of-the-art in life support technology in the first half of the 20th century. The first iron lung was used at Boston Children's Hospital to save the life of an eight-year-old girl with polio in 1928.

What was the iron lung for?

Incidents of poliomyelitis (polio) began to rise to epidemic proportions across Europe and North America, reaching their peak in the United States in 1952, with 57,628 cases in one year.

One of the worst symptoms of acute polio was muscle paralysis. If paralysis affected the chest muscles, the patient couldn’t breathe unaided and might die. Researchers looked to technology for a way to keep these patients alive.

The solution came from a team at Harvard University. The 'iron lung', as it was nicknamed, was a huge metal box attached to bellows in which the patient was encased. The continuous suction from the bellows kept the patient breathing.

Philip Drinker and Louis Agassiz Shaw invented the first iron lung at Harvard School of Public Health. It consisted of a huge metal box with a set of bellows attached at one end to pump air in and out. The whole body was enclosed in an airtight chamber, apart from the head. A tight rubber seal supported the neck and ensured that air did not escape.

Mechanical breathing apparatus were not a new idea, but the huge scale of the polio epidemics motivated researchers to come up with a device.

Drinker and Harvard University felt that the Emerson respirator was too similar to the original and sued Emerson for infringing on their patents. In court, Emerson's lawyers demonstrated that all the technologies used by Drinker already existed and so could not be patented.

Emerson won the case and all the patents were declared invalid. The judge also agreed with Emerson that a technology that saved lives should be shared by everyone.

A few years later, the Both Respirator was born of necessity. When a polio epidemic broke out in Australia in 1937, the cost of buying and transporting Drinker Respirators all the way from America was so high that the South Australian Health Department asked biomedical engineer Edward Both to come up with a cheaper alternative.

The Both respirator was made of plywood. It was not only cheap, but also easier to construct and transport. In some cases, the Both was in use within one hour of production. Lord Nuffield was so impressed with the Both design that he had around 1,700 machines built at his car manufacturing plant in the UK and donated them to hospitals around the world.

How did the iron lung work? 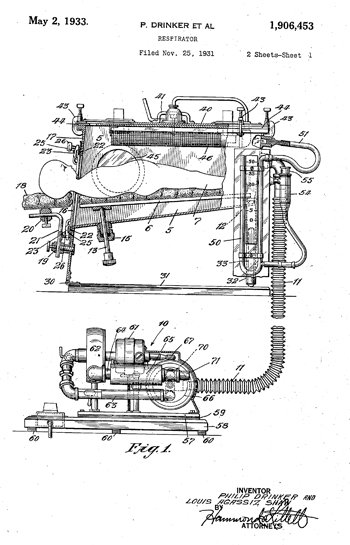 The respirator worked by pushing air into the lungs by method of artificial respiration called External Negative Pressure Ventilation (ENPV).

The bellows sucked air out of the box in which the patient was sealed. As the air pressure in the box fell, the patient’s lungs automatically expanded, drawing fresh air into the diaphragm.

When the bellows allowed air back into the box, the air pressure rose and the patient's lungs deflated passively, pushing air out of them.

The rhythmic ‘whoosh’ of air from the iron lung became the reassuring sound of patients breathing.

Image: A page from Philip Drinker's and Louis Agrassiz Shaw's patent for an artificial respirator. US Patent no. 1906453, 1933.

Going into an iron lung was a bewildering process for patients, many of whom were delirious and in extreme pain.

Life in an iron lung was difficult for both patient and carers. The numerous tasks involved in treating the patient included:

In addition to medical care, itches were scratched, noses blown, hair combed, bodies washed and bedpans inserted and removed, all through the portholes as far as possible.

When the portholes were inadequate, tasks such as physical therapy had to be completed in the few minutes that a patient could breathe on their own outside the iron lung.

One of the biggest problems for patients was boredom. A mirror could be attached above the patient’s head, so they could see what was happening around them. They could also read books suspended in front of their faces if someone turned the pages for them.

In larger iron lung wards they had other patients nearby to provide companionship and psychological support but visiting hours for family were limited.

Polio particularly affected young children, and it was especially difficult for them to understand what was happening to them. Lord Mayor Treloar Hospital in Hampshire specialised in the treatment of children affected by tuberculosis and polio. They used dolls to explain what would happen to them during treatment.

How long did you spend in an iron lung?

Most patients only used the iron lung for a few weeks or months depending on the severity of the polio attack, but those left with their chest muscles permanently paralysed by the disease faced a lifetime of confinement. ​​​​​​

Therapists used several techniques to help patients regain strength in their chest muscles. By slowly extending the time outside the cabinet the patient could gradually build up the muscles to the point where they could spend most of the day outside the iron lung, returning to it at night to give tired bodies time to rest.

The technique sounds straightforward, but in practice learning to breathe again was a difficult and frightening process, as one patient, Kenneth Kingery recalled:

I’d have to strain my every fibre for a breath of air. And there was always a helpless terror – wondering whether they’d close the tank in time.

The process of recovery could be long and difficult. In addition to rehabilitating the lungs, physical therapy in the form of ice packs, heat packs and massage were necessary to stop other unused muscles from atrophying.

Damaged muscles could take up to two years to recover maximum functionality, during which time the patient had to continue a rigorous regime of physical therapy and exercise.

Is it still used today?

Once an effective polio vaccine was developed in the 1950s, the incidents of polio infection fell dramatically and only a very few machines were needed in hospitals. But patients dependent on them to breathe the old iron lungs were gradually replaced with modern ventilators.

Ventilators are used today in intensive care units and emergency wards rather than for polio victims. The patient no longer needs to be encased neck to toe in a coffin-like box. Not only do they have the advantage of allowing full access to the patient, they also monitor and record breathing and other vital signs.

Ventilators have also been used in surgery since the 1950s. Surgeons began to use drugs during operations to relax the muscles and make surgery easier, but relaxed chest muscles suppressed breathing, so a ventilator was needed to make sure the patient didn't stop breathing.

John Haven Emerson, of the Emerson iron lung, developed the first mechanical assistor for anaesthesia in 1949. It's still the job of the anaesthetist to operate the ventilator and monitor patient breathing.

Modern ventilators are compact machines that sit beside the bed. They use a Positive Pressure Ventilation Systems (PPVS), in which air is pushed directly into the patient's lungs via intubation of the airway—inserting a tube into the air passage.

But even the modern ventilation system is a legacy of the polio epidemics—the first PPVS device was developed Copenhagan, Denmark, for an outbreak of polio in 1952. 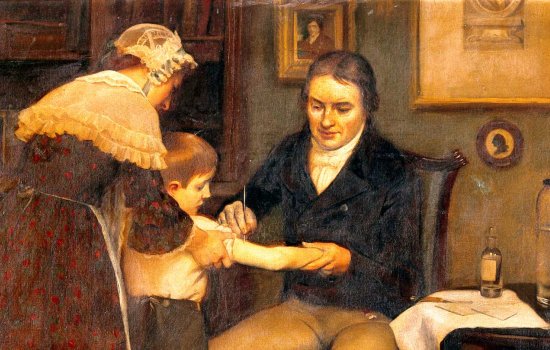 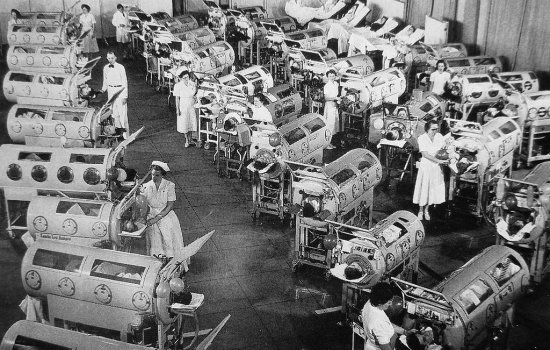