Hospitals are at the heart of modern healthcare. Hospital medicine has shaped both medical practice and medical training.

Hospitals are home to medical specialists using the latest tools and techniques to treat every condition known to medicine. They are also at the centre of medical education—the places where students get practical training for becoming doctors and nurses.

What is hospital medicine?

Hospital medicine is a very practical set of procedures used by doctors to diagnose a patient's condition. They include:

Elements of hospital medicine have been around for as long as medicine itself. The ancient Greek physician Hippocrates emphasised the value of observation in diagnosis.

But these procedures were first used systematically in the hospitals of France, particularly Paris, after the French Revolution.

Hospital medicine was first practiced systematically in France, following the French Revolution of 1789.

Elements of pathological anatomy and clinical observation already existed in Leiden, London, Paris, Vienna and Edinburgh. And the the principle of ‘bedside learning’ as a way for doctors to gain experience, has been traced to the early Islamic hospitals.

At first the leaders of the French revolution shut down all the hospitals and medical schools because of their association with the Church and the corruption of the old regime. They believed that simply by eliminating social inequality and corruption, universal health would follow and there would be no need for hospitals.

But disease did not disappear and instead of abolishing hospitals they ended up reinventing medical training and practice.

The French system started with the reform of medical education and training. A new curriculum motivated by the need for more military doctors was instituted in the re-opened medical schools. The division between physicians and surgeons was broken down to include both surgical and medical training.

Hospitals were no longer just places that cared for patients. They were places of learning and knowledge, at the centre of medical training and practice.

Emphasis was placed on learning from practical experience rather than the university lecture. One of the chief architects of hospital medicine in France was Antoine Fourcroy, a doctor and chemist. He summed up the practical training as:

read little, see much, do much

Clinical instruction, learning by observing and treating actual patients, was pioneered by the Dutch physician Hermann Boerhaave in Leiden in the 18th century.

Hermann Boerhaave (1668-1738) regularly admitted interesting cases to the wards at the St Caecilia municipal hospital for his students to observe. And at the university, he illustrated his lessons with actual cases.

Physicians came from across Europe to work with him, learning new techniques and knowledge to take back to teaching hospitals in their own countries.

For those who could afford it, there was the chance of a medical, and especially surgical, apprenticeship in a hospital where the variety of cases they would encounter exceeded even the largest private practices.

But clinical instruction did not become a standard part of medical training until well into the 19th century.

Many elements of the French system are still used in hospitals. The hospital ward round—in which a senior doctor, accompanied by junior doctors and medical students, discusses a case at the patient’s bedside—still forms part of medical training.

The traditional physician took an holistic approach to diagnosis, taking into account the patient's circumstances and experience of illness as well as their physical condition. Physical examination of patients was rare.

In hospital medicine, doctors focused on observable signs of disease on the body, rather than the patient’s account of their illness in order to make a diagnosis. René Laennec introduced the technique of auscultation and the stethoscope to help doctors listen for signs of disease the circulatory and respiratory systems.

Ultimately physicians such as Xavier Bichat advocated looking for signs of disease inside the body after death. Morbid anatomy (later called pathology) departments in hospitals were created for this purpose.

In pathological anatomy, the doctor looks inside the body for signs of disease. In most cases this could only happen if a patient died and an autopsy was performed.

In the early 19th century, the majority of patients in the large Parisian hospitals were poor and desperate. Unless their bodies were claimed by families when they died, the hospital took charge of the body, giving doctors the opportunity to study the symptoms of a disease after death.

Post-mortems (also called autopsies) showed traces of a disease—called lesions—on the various organs of the body. Doctors were able to confirm their earlier diagnosis by correlating external symptoms with internal lesions.

The death rate in early 19th century hospitals was very high, so they had lots of chances to collect evidence from multiple cases of the same disease.

Hospital medicine provided the opportunity to compare large numbers of patients with the same disease. A more reliable system of identifying and classifying diseases emerged, incorporating:

These remain the basis of disease identification today. Doctors use this differential diagnosis technique to distinguish between diseases with similar symptoms, based on their defining symptomatic, pathological and laboratory characteristics.

Pierre Louis was one of the first to use the technique to characterise typhoid as a distinct disease from other fevers:

While working in Paris Pierre Louis studied many cases of 'putrid fever', a condition that was also known by many other names and prevalent in Paris.

From his many clinical observations he characterised the defining symptoms as fever, rose-coloured lenticular spots (a type of rash) and diarrhoea. Morbid anatomy of many fatal cases revealed that there were also inflammed lesions on parts of the intestine called peyers patches.

Louis published his findings in a publication on fevers. He called the fever he had identified typhoid as distinct from other fevers. But not everyone was convinced.

In London there were also several fevers circulating among the population, but where typhoid was the predominant fever in Paris, in London it was more likely to be another fever that we now know as typhoid.

British doctors who carried out post-mortems on their fever patients often failed to find any lesions on the intestines and remained sceptical about Louis's findings. But in the United States, where typhus was rare, they were able to corroborate Louis's findings in among cases of typhoid, and his method became very influential.

The large numbers of patients with the same disease also gave rise of another form of medical evidence: statistics. Pierre Louis (1787-1872) pioneered clinical trials as a way to evaluate treatments.

Louis came to realise that many of the treatments on offer did little to cure his patients. This ‘negative’ outcome was a genuine discovery for doctors who had previously given little thought to seeking evidence for whether or not their remedies worked.

One of the results of Louis's investigations was the decline of blood-letting as a treatment. The treatment was based on the ancient Greek humoural system of medicine and was traditionally passed on to each generation of physicians through university lectures that promoted the authority of ancient medical texts.

Louis's clinical observations and his analysis of the data revealed that blood-letting was ineffective in either relieving pain or alleviating other symptoms. The numerical method is the basis of modern evidence based medicine.

Until the 1850s, Paris was seen as the centre of medical innovation. Doctors came from across Europe and America to work in Paris hospitals and so the methods employed there spread quickly. By the early 19th century a medical school that was not attached to a hospital was considered second-rate.

The greater reliability in diagnosing diseases and awareness of how disease affected the internal organs, led to greater specialisation in medicine. The number of medical publications based on a single organ or part of the body proliferated as doctors advertised their new specialisms.

Technology began to play a bigger role in diagnosis and treatment as hospitals became larger and wealthier. Electrical and x-ray departments proliferated in the 1880s. By the 1890s hospitals were firmly established as institutions for treatment, research and medical education, located at the heart of modern medicine.

This made them the logical place for the rise of laboratory medicine, where chemical and bacteriological analysis added to the evidence used to confirm a diagnosis or characterise a disease.

The high cost of new scientific equipment and treatments meant that many services such as laboratory analysis, x-ray and surgery had to be centralised in hospitals, along with the expertise to operate and interpret them.

Hospitals had been places where the poor and desperate were sent as a last resort, but by the 20th century, patients sought the latest and best treatment in these cathedrals of modern medicine.

Find out more about hospitals 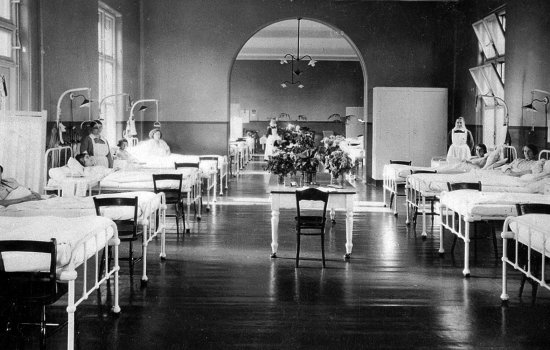