From the earliest days of computing, women have been involved in the field and made important contributions to the development of modern computers.

Read on to find out about three pioneering women in computing, from the 1840s to the 1970s, and discover the impact of their work today.

Ada Lovelace (1815-1852) was an English mathematician, writer and visionary.

Her work on Charles Babbage’s Analytical Engine has led her to be considered the person who first saw the potential of computing for general programming beyond simple calculations.

Early life and interest in mathematics

In her lifetime, Ada Lovelace was better known for her parentage—being the sole legitimate child of politician and poet, Lord Byron—than her contribution to mathematics and computing.

Lovelace had an early and natural interest in mathematics and machines. Her mother supported and encouraged these interests because she believed strongly in women’s education, but she also hoped rationality and logic would counteract the influence of Byron's romantic nature and 'mental instability' upon her daughter.

The two collaborated until Lovelace’s death in 1852, and Babbage referred to Lovelace as his ‘Enchantress of Numbers’.

In 1812, Babbage conceived the idea of a mechanical machine—the Difference Engine—that could automatically calculate and print mathematical tables, which he worked on throughout the 1820s.

In 1834, Babbage took the idea of automatic calculation one step further with the Analytical Engine. This ambitious machine had even higher powers of analysis and is considered the first fully automatic calculating machine or computer.

But Babbage never completed the ambitious design and only trial pieces remain, completed before his death in 1871. If completed, the Analytical Engine would have used steam power to conduct its operations by moving a complex set of cogs, levers and punch cards, thought to have been the size of a large room. Babbage wanted it to be capable of addition, subtraction, multiplication and division—the basic operations of a modern computer.

Lovelace’s most substantial contribution to Babbage's Analytical Engine—and to early computing—are her translations of, and notes relating to, Italian military engineer Meabrea's memoir ‘Sketch of the Analytical Engine Invented by Charles Babbage’, based on a lecture Babbage gave in Turin.

Lovelace worked on her translation and notes for nine months between 1842 and 1843, in regular discussion with Babbage. The notes were so extensive they ended up being around three times the length of Meabrea’s original text. They were published in August 1843 in Taylor's Scientific memoirs, credited as ‘Notes by A.A.L. [Augusta Ada Lovelace]’. This publication was the only extensive paper on the Analytical Engine published in English during Babbage's life.

Lovelace’s notes outlined the potential of Babbage’s Analytical Engine for general programming beyond simple calculations and how it could be used to manipulate quantities other than numbers such as symbols, letters and even musical notes.

Lovelace added flesh to the bare bones of the original paper, providing a clear description of the more general programmable application of Babbage’s Analytical Engine, as well as further potential applications and outcomes of the device.

Her Note G looked at a complex sequence of numbers known as the Bernoulli numbers as an example of what the machine could calculate.

What are punch cards?

Punch cards are thick paper cards with a series of holes punched into them to represent data and programmes.

Jacquard looms, first built in 1804, used an early example of punch cards to control the weaving of cloth and make intricate patterns.

Punch cards were used in programmable electronic computers from the 1950s through to the 1970s as the main way to input and store data.

They were manually punched by mostly female operators.

Lovelace proposed a vision of a wider programmable application (or algorithms) for Babbage’s machines. Distinct from his practically minded ideas about the mathematical calculating operations of his computational engines, this vision is perhaps the most important aspect of Lovelace’s notes.

Today, algorithms underpin much of the digital and electronic world we live in—from finding routes on maps to providing secure communication.

However, Lovelace’s contribution to early computation went largely unnoticed by the male-dominated scientific and mathematical community of the mid-19th century and was not fully appreciated until the advent of electronic computing a century later.

Digital electronic programmable computers were first developed in Britain and the USA during the Second World War, predominantly for military use. These computers were mostly operated by women, as it was considered a low-skilled role equivalent to secretarial work.

After the war, the main peace time applications for computing were scientific, engineering and academic research alongside existing military and intelligence work.

The first business application for the embryonic electronic computing industry came from an unexpected place: Lyons Teashops, a common sight on the British high street throughout most of the 20th century and one of the country’s leading food and catering companies.

Lyons sold millions of cups of tea and penny buns, and senior executives recognised the value computers could provide for business and stock management.

But they were unable to convince any existing business equipment manufacturers that the idea was practical—so they decided to build their own computer.

By 1951, Lyons & Co had developed Lyons Electronic Office, to be used for stock control and ordering, statistics and payroll. Better known as LEO I, this was the world’s first automated office computer system, transforming office work and kick-starting the British computer industry.

It was also in 1951 that Mary Coombs began working for Lyons, initially as a temporary clerical worker during the summer holiday of her final year at Queen Mary University, London. Coombs returned to Lyons as a management trainee in 1952.

Coombs did not have much mathematical knowledge—her university degree was in French. Despite this, her mathematical talents and aptitude for logic were recognised and she soon began training as the first female commercial programmer in Britain, working on the LEO computer system.

In 1952, Coombs was the only woman on a Lyons’ programming selection course or ‘LEO appreciation course’, alongside nine men. Coombs passed the course and a few months later enthusiastically accepted an offer to work on LEO in Lyons’ computer division.

LEO I was the first business computer and was used for a variety of tasks including stock control and ordering, statistics and payroll. It was a large mainframe computer, taking up an entire room. LEO I had 2 kilobytes to be used as the equivalent of disk space on which to store information and a completed programme.

This was a real challenge for all programmers, Coombs included, and error checking was a key part of their work. Coombs later described how one intermittent error was identified as being electrical interference from a nearby managers’ lift.

Coombs initially worked on programmes for internal use, including payroll programmes. She went on to become a supervisor, ‘debugging’ programmes written by other members of the Lyons computer division.

She was also employed on external contract work. The LEO I computer was innovative, and word quickly spread of its speed and efficiency, leading to demand on by other organisations including the Ministry of Defence and the Ford motor factory at Dagenham.

Such was the success of the LEO external contract work that in 1954 Lyons established Leo Computers Ltd to sell LEO computers to companies around the world. Through this, they developed LEOs II and III. Introduced in the early 1960s, LEO III was a state of the art computer and an early adopter of transistor technology.

Coombs worked for Lyons and Leo Computers Ltd until 1963 when Lyons & Co. merged with English Electric to form English Electronic Lyons Company.  In the 1960s, the computer industry was female-dominated and Coombs was able to balance her career and family commitments.

Beyond LEO, her achievements included writing several computer manuals, training as a teacher and training people with disabilities in computer programming

Dina St Johnston (née Vaughan, 1930–2007) was an early computer pioneer and founder of the first independent software production company in the UK.

St Johnston left school before completing her secondary education and went to work for the British Non-Ferrous Metals Research Association (BNFMRA). During her six years working at the BNFMRA, St Johnston studied part-time for a London University degree in mathematics. She left the research association in 1953 due to a lack of promotion opportunities and salary increases and went to work for Elliott Brothers Ltd., an early computer company.

In 1953, St Johnston began working on a small Elliott Brothers computer called Nicholas, which was used to calculate missile trajectories. The following year, she was sent to the Cambridge Summer School on Programming where she showed a real talent for programming.

When St Johnston came back to Elliott Brothers, she started work on the Elliott 153 Direction Finding (DF) digital computer for the Royal Navy.

Located near Scarborough in Yorkshire, the Elliott 153 was a classified project tasked with finding the best possible location for radio signals intercepted and transmitted by teleprinter from several distant listening stations worldwide. St Johnston was responsible for programme development.

In 1956, St Johnston worked on Elliott’s payroll computer. In the same year, she was responsible for the initial applications software for the Elliott 405 computer for Norwich City Council. This was the first electronic computer to be used by a local authority.

St Johnston developed a limited number of Vaughan computers and designed software for some of the UK’s earliest computers, specialising in military, aerospace and railway control systems for private clients such as British Rail, Unilever, the BBC, and the nuclear industry.

St Johnston was a pioneer in many areas of computing. Her work on early computerised railway control systems in particular was recognised when she was made a Fellow of the Institute of Railway Signal Engineers in 1990.

She remained a hands-on director of Vaughan Systems Limited and an active programmer until the mid-1990s.

Women have made important contributions to computing—manual, mechanical and electronic—from its earliest days . From the 1700s until the early 1900s, 'computers' were people—low-paid and often female workers who did the laborious and repetitive calculations needed for astronomy observations, ballistics calculations and biology. This work was often unacknowledged or uncredited as it was considered low-skilled.

Into the 20th century, early computer programmers, operators and software developers were also mostly women, as the work was considered akin to secretarial work—low-skilled, low-paid and without a career path.

Despite these obstacles, women made (and continue to make) important contributions to computing.

In the 1840s, Ada Lovelace showed mechanical computers had a wider application beyond mathematical calculations and wrote what is considered the first computer algorithm.

In the aftermath of the Second World War, Mary Coombs became the first female computer programmer and worked on LEO, the ground-breaking business computer.  And in 1958, Dina St Johnston established the first independent software production company in the UK.

More objects and stories on computing 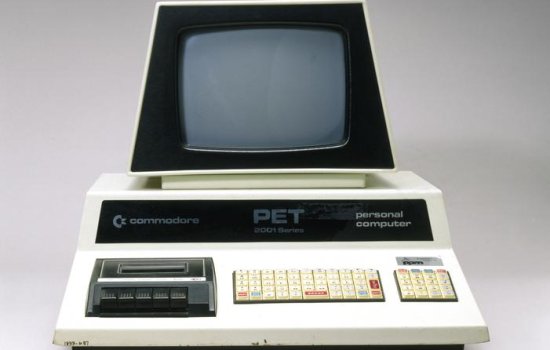 From slide rules to Douglas Hartree's differential analyser and Ferranti's early computers, these objects trace the development of calculating and computing technology. 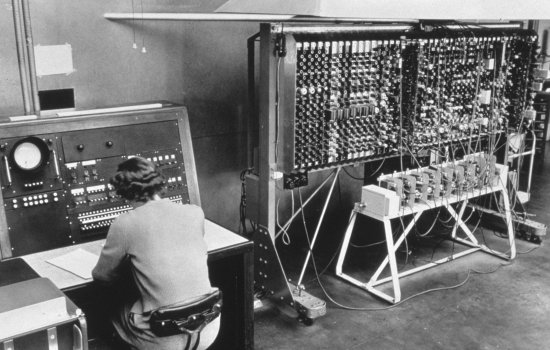 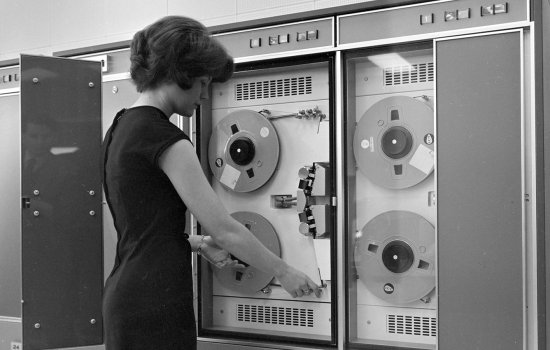